A Little About Redmond

Home of the world famous Microsoft company in King County, Redmond is made up of a total of 16.9 square miles and has a population of about 55,000. This city is located just 16 miles east of Seattle, and obtains three different Zip codes - 98052, 98053, 98073. Surrounded by Kirkland to the west, Bellevue to the southwest, and Sammamish to the southeast, Redmond contains 23 developed public parks that total more than 1,000 acres. The most prominent of the parks is Marymoor Park, which is visited by people from all over. The park has numerous things to offer for entertainment, such as: a climbing rock, model airplane flying field, 48 acres of an off-leash dog park, an outdoor theatre, sports fields and courts, a playground, a community garden, and a velodrome.

Known as the “Bicycle Capital of the Northwest,” it’s always a good day in Redmond to go for a ride to enjoy the scenic views of lush green areas, or to experience the Sammamish River along the west edge of the city’s downtown. Redmond is part of the Lake Washington School District, with 10 elementary schools, three middle schools, and two high schools, and also has a few private schools  within the area. Also partaking in small activities like concerts or festivals throughout the year, Redmond always has something to offer for people to enjoy. 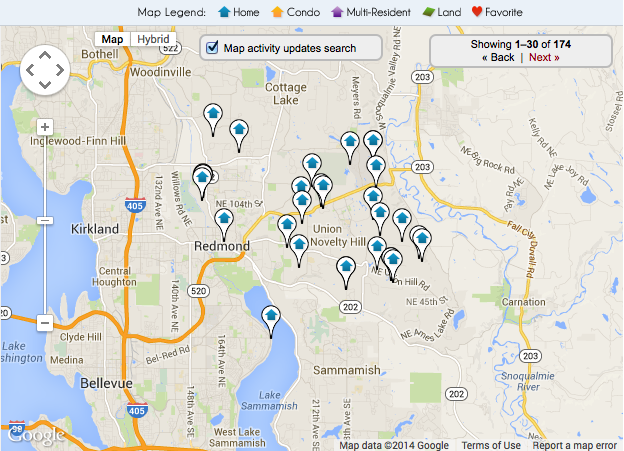 The opportunities for purchasing reasonably priced real estate in Redmond are endless, as there are many condos and houses to choose from in the area. While many of the houses for sale in Redmond start below $500,000, and some go for over $1,000,000, the majority of them come accompanied with bright green grass and countless trees. Condos in Redmond make for a cozy way to live, whether wanting to be alone or joined by a roommate or significant other. Generally ranging anywhere from the low $100,000s to the upper $400,000s condos come with the benefit of residing in a relaxing environment and not having to personally maintain the yard and surrounding areas.

An opportunity to reside in the heart of Overlake, steps from Microsoft Campus & Redmond’s upcoming Light Rail station. Tucked away at the end of a quiet cul-de-sac sits ...

Live, work & play in the heart of it all at the sought-after Meadowview Village and experience Redmond living at its finest! Spacious living room w/9' ceilings, large win...

Welcome to one of the finest locations for a Grass Lawn neighborhood home, just minutes from Microsoft and Google. Updated, yet retains a traditional northwest design and...