A Little About Queen Anne

Sitting on the highest named hill in Seattle, the Queen Anne area is often recognized for its closeness to the downtown area as well as its three television broadcast towers. The large neighborhood area covers 2.8 square miles and has a population of about 28,000. Obtaining the 98109 and 98119 ZIP codes, the area is over generously populated by unmarried, young adults who tend to be better educated and wealthier than the majority of Seattle.

Located northwest of downtown Seattle, Queen Anne is bordered by Belltown to the south, Lake Union to the east, Magnolia to the west and the Lake Washington Ship Canal to the north. A total of 25 parks are maintained by Seattle Parks and Recreation in the Queen Anne area that provide different attractions to the public. Those attractions include a dirt running track, an indoor swimming pool, baseball fields and more.

There are 29 official Seattle landmarks that are present within the Queen Anne area, including historic houses and other architectural structures. The area is also closely associated with the Seattle City Center which possess the Space Needle, Pacific Science Center, Experience Music Project, the Key Arena and more. Queen Anne can be reached  by Interstate 5 from the Mercer Street Exit (167). 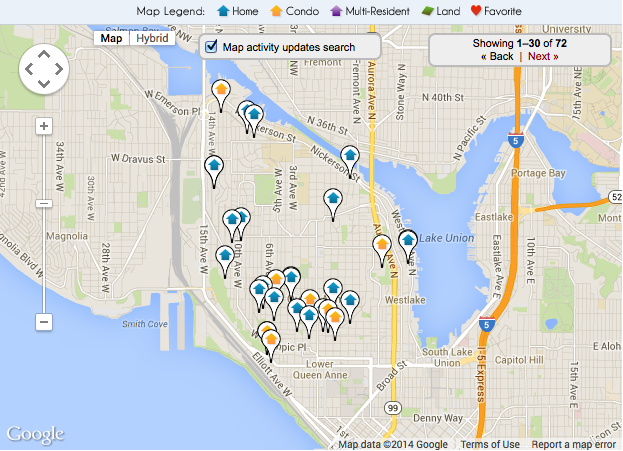 Real estate in Queen Anne is often of desire for those who enjoy the view of Mount Rainer, West Seattle and Elliot Bay. Known for its development of mansions that began to arise from the prestigious and wealthy in the 1850s, many of those homes in Queen Anne have been renovated and are available for purchase.

Starting in the price range of low to mid hundreds, condominiums in Queen Anne are the perfect fit for someone looking to live alone or with another roommate. Guaranteed to be exposed to an appealing view, condos in Queen Anne are a good way to start out in the city.

Houses in Queen Anne also allow for small or large families to call this community their home.
Those who enjoy the surroundings of nature, as well as interactions with people will find themselves indulged in the opportunities that are within the area. No matter the desire for a craftsman, historical-looking home or a recently built one, the real estate in Queen Anne is definitely full of opportunities to meet anyone’s expectations.

Welcome to the best seat in the house for sweeping views of Puget Sound & the Olympics, now yours to claim! A private west-facing roof deck doubles the size of this sleek...

This distinctively designed urban farmhouse has all the modern luxuries while still maintaining the classic QA charm. Positioned on a high corner lot for maximum views, e...